Showing posts from February, 2012
Show all

February 27, 2012
Oh, I'm always willing to go along with a crowd ;).  At any rate, I figured I fall in line with the latest OSR meme 20 Questions .  Here's my answers: 1.   Ability Score Generation Method?   4d6, drop lowest, arrange as desired.   Not Old School, but who cares, I want the players to play the characters that they want (within the limits of the campaign) and not fuss over having to play a fighter with 9 str and 9 con.   2.   How are death and dying handled?   0 is unconscious and anything below that is dead 3.   What about raising the dead?   Incredibly rare.   The current group is still a bunch of first level newbs so it hasn’t come up…yet. 4.   How are replacement PCs handled?   Again, hasn’t come up yet, but it probably would be a matter of the party returning to town and an new character joining at that point (or I’m open to some logical in game explanation such as meeting the new player on the road, in the wilderness, etc). 5.   Initiative?   Individual.   Again,
Post a Comment
Read more

February 26, 2012
I've been working on a small one level dungeon for my zine endeavor, Delve!  Daisey questioned me as to why I'd take on yet another project since I have my commissions (upcoming stuff for Lands of Ara and North Wind publishing - Astonishing Swordsmen and Sorcerers of Hyperborea!), along with things like Polstrus Lev, Bassalt Keep of Wilven the Yellow, etc.  I understand her point, but I figure that doing a zine is a good way to help me hone my other (larger) projects.  I'm not sure if that's necessarily true, but I'm still pressing on.  So far, I've almost finished writing the 11 room dungeon entitled Lair of the Pustulent Lord for Delve! issue #1.  Of course there will be some new monsters, new magic items, and new spells.  Since this is my creation, it'll also have new art by me in it too.  I'm thinking of doing a free ezine format and a print version (I'm still working on pricing and logistics).  For a print version, if anyone knows a good way for
3 comments
Read more

February 22, 2012
Yeah, so, I got my long stapler and card stock in the mail yesterday and I'm crazy excited.  I've got to focus my ambition though and actually get around to producing a finished product.  I'm a bit concerned about distribution though.  One thing about working for the military overseas is that I can't conduct business through the APO system.  Since I'm not looking to profit from zine making, I'm looking at ways to get a zine out to those interested and not abuse the mail privledges.  So, I'll look and see what the postal rates are for the Italian mail system.  It'd be nice to see if there are any distribution services to do this stuff on consingment.  However, I expect my runs to probably be VERY small (like around 20-30) so it shouldn't be too much of an issue for the hard copy.  I'll probably do a pdf version as well.  Like I saidn, I'm not sure what kind of interest there is going to be for this, but really, it is mostly to satisfy a DIY it
7 comments
Read more

All quiet on the Eastern front 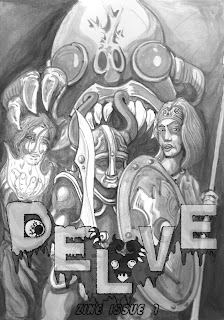 Well, not really, as usual, I'm working on stuff and I, um just can't show anyone right now really.  I'm looking forward to getting back to gaming this weekend especially after having been sick.  Polstrus Lev is shaping up nicely.  I'm looking forward to putting my players through it.  Hopefully at some point I'll release it in PDF or something.  But I'll probably need an editor.  This writing stuff is hard so to all you writer types out there, hats off to you.  And to the editors for helping create finely honed works of goodness.  I'm not going to say that writing is harder or easier than the art part of a project, just different and challenging for me. At any rate, I've been plunking away at a small adventure for Delve! Zine.  I'm waiting for my long stapler and some other supplies to come in the mail.  Here is a teaser (probably not final art as I'm thinking about a card stock cover with hand printed covers of some sort).  More to follow...
5 comments
Read more

February 11, 2012
So, this is my 333 post here on Ostensible Cat.  I've been a little lax in posting for the past few months but things have been really busy.  Daisey and I have been working on various projects.  I've been deeply involved in many of my own projects such as Polstrus Lev (I've got almost the entirety of the first level keyed - 41 areas) as well as running my own weekly game (which is more like a biweekly due to all the illnesses going on around here in bella Italia).  I'm also working on my own zine that I'm tentatively calling Delve! Zine.  I'll have more on that in the future.  Here's a peek at some work I've done for the Lands of Ara blog here .  You can get a sense for Daisey's brilliant color work.  I'm going to do a full post about that piece once Carter and the gang release the compendium.  Daisey and I also did a cool piece for the Kobold Quarterly artistry contest recently.  They haven't started posting the pictures yet but I'll
2 comments
Read more

February 06, 2012
Back to the Caves of Chaos!  The group had to head back to the Keep to reprovision.  The kobolds in the previous encounter used some rather nasty tactics that took their toll on the party.  No one died, but they were very battered after the experience and wisely chose not to forge on as they probably would have all been killed.  The kobolds retreated when necessary, fought running battles, went for reinforcements, etc. This time, the party chose to enter the goblin section of the caves.  It went a little better for them but the goblins did put up a good fight.  The party managed to clear several areas.  The goblins were less organized but they did employ some tactics (such as sending a runner for reinforcements).  At one point the party came to a room with a closed door.  A couple of goblins from a previous encounter had retreated to here and were anticipating the party's arrival.  The party members did listen at the door and decided to go gangbusters and bash the door in.  They
Post a Comment
Read more

February 02, 2012
I'm pretty thrilled to have been able to in a very small part, contribute to Autarch's Adventurer Conqueror King (latest info here ).  I know there have been various attempts at Domain play for old school versions of D&D.  ACK covers this stuff exceptionally well.  In my current group, the gang is still only 1st level, but I'm encouraging them to think in terms of where they want to go with their character concepts.  ACK fits that bill nicely.  I was fortunate enough to be at the Old School Renaissance Booth at Gen Con this past summer and met Tavis and Ryan.  I picked up a prerelease softcover version of the rules and have been pretty excited about trying out some of the concepts.  I think that there is a lot to like here.  Especially for those folks playing older versions of D&D (or retroclone flavor of D&D), this makes a good companion work to expand the high level domain play.  If that sounds like it's your bag, go check it out.
2 comments
Read more

February 01, 2012
The gang over at Open Design and Kobold Quarterly have just closed submissions for their artistry contest .  Just for fun, Daisey and I threw our names and artwork into the hat.  I'm excited to see the submissions.  I had a lot of fun with this and hope to show off the work Daisey and I did.  Quite frankly, I think she really outdid herself on the color work for this one.  It's a fun piece with a HUGE shout out to the old schoolers.  I've been following Wolfgang's Open Design work since he started it and am very pleased with what they have done.  While the bulk of my attention and affection goes towards Old School D&D, I first and foremost a hobbyist gamer and really love the grass roots hobbyist efforts by the Open Design community.  I even did some work a while back for some Open Design projects.  In the end, I'm excited to see folks that are as obviously fond and committed to gaming doing so well and come up with some cool ideas to boot.
2 comments
Read more
More posts