Showing posts from August, 2011
Show all

August 18, 2011
I'm still out and about travelling across the country. Right now I'm back with the family in the Springfield/Branson, MO region and having a good time. I've been gone from Bella Italia for two weeks and I must confess that I really am itching to get home though. I miss Daisey and the kids and am looking forward to getting back into the swing of my normal routine. I'm especially looking forward to starting a gaming group up once I get back. I've several pent up ideas that I'm looking at unleashing upon my unsuspecting players. Most of the folks I've lined up haven't played old school rpgs so I'm really looking forward to treating them to the ways of such games. They are all pretty excited so we'll see where it goes. I need to knock some of the rust off of my DMing but it'll be good to be at the helm. I've got a few new commissions lined up and I'm excited to be putting pencil and brush to paper. It feels like it's been
3 comments
Read more

August 13, 2011
I was just reading a Geekdad about the proposed $150 million USD biopic based on Gary Gygax's life and work. Reading through some of the details, I'll admit to being pretty bemused by the whole thing. I'd totally love a documentary based upon Gary, Dave Arneson and the early days at TSR but I cannot see that going into the multi-million dollar range. Maybe 1-3 million (and I think that's a stretch). Gary made D&D and we all have been affected by this to greater or lesser degrees. I'm not sure that trying to make a film for the masses is really the way to honor Gary's legacy. I could be wrong, but looking at the guys that's making the movie's screen credits, I'm highly suspicious. And hiring on a big name actor to play Gary? Why not just have interviews with the folks that worked with him like Tim Kask, Frank Mentzer, Jim Ward as well as Gail Gygax, Ernie and Luke, people in the games business, other big names like Vin Deisel and the like
2 comments
Read more

Cat in the City: Ostensible Cat at GenCon 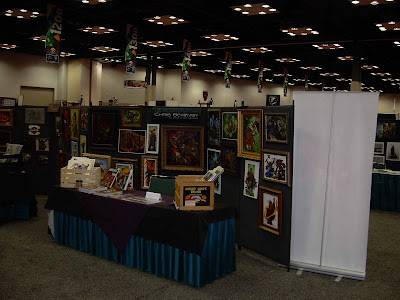 OK, OK, so it's a week after the fact but I've had a cold and still jet lagged abit. But, I did have a great time at CenCon Indy 2011. I've never been to a major Con so I had absolutely no idea what I'd be in for. If you haven't gone before, I'd recommend going at least once for the sheer spectacle. It was very cool to be able to talk to RPG business folks like Joe Browning, Suzi Yee, Phil Reed, Diesel LaForce and others. It was even more fun to see the reactions to the OSR at a major con. The OSR group booth was pretty busy thoughout the con. I loved interacting with fellow old schoolers. It was a bit surreal to sign books that had my work in them but cool none the less. It was great to have the Gygax Memorial Fund folks sharing a booth and to be able to talk to Gail Gygax. I donated and picked up a copy of "Cheers Gary". I was pleasantly surprised to see that one of the comments in the book that they chose was mine. Yep, that's me on
2 comments
Read more

Another Isle of Maedsid Map and some art 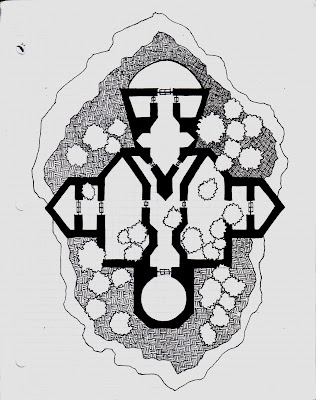 OK, GenCon is almost upon us and I am getting prepared to depart. However, I'm still working on my Isles of Maedsid adventure. Here's a map for one of the sulevels here the Kulakir (baboon/avian beastmen) reside. The Kulakir live on a world that is comprised of floating landmasses covered in thick jungle growth. Here's a map of one of the landmasses that's nearing completion: Here's a peek at one piece of art for Maedsid. It's a spectral black dog, one of the guardians of the funerary mound. The drawing is not yet complete, but getting there. I don't know yet when exactly I'll be done with this so I guess the appropriate answer to that is "it'll be done when it is done." However, I've committed to myself to at the very least have a draft version out before the close of 2011 ;). That is something coming from me since I have been working on my adventure "Sinister Sightings at Dustchappel Downs" since 2006 (and I fu
Post a Comment
Read more
More posts