Showing posts from December, 2012
Show all

I hope everyone had a very merry Christmas! 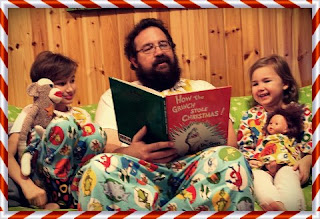 I hope you all had a most excellent Christmas!  I know we did at the Bingham house.  Thing 1 and Thing 2 had a great time playing with all of their new art/craft supplies and Legos.  I am super excited about the pottery class that Daisey signed me up for.  Time to start making some mugs, plates, and some honey pots fpr my homemade wines (and eventually honey and mead).
2 comments
Read more

December 24, 2012
I hope everyone is having a great Holiday Season and getting to spend time with loved ones.  Here at Ostensible Cat HQ, we have begun placing some of the presents under the tree and Daisey and the kids have been baking cookies.  As for me, I've been slacking off and plinking away at Delve!  as well as working on some art commissions.  Now that I've got my art processes, down, I can do artwork in a fairly quick manner.  I need to develop similar processes for writing.  I suppose that will come with time and practice.  Ah well, I hope all you out there have a safe and joyous Christmas!
2 comments
Read more

December 21, 2012
If you're reading this, then you've apparently survived the end of the world.  Congratulations!  Yes, I'm still alive to (well at least at the time of this writing).  I've been working away on several art orders for Expeditious Retreat Press and still plucking away at issue two of Delve!  I'm also percolating ideas for a third issue.  At any rate, I hope everyone has a happy and safe Holidays!
1 comment
Read more

December 02, 2012
Yes, it really is - in a few weeks at any rate.  That is of course we survive the impending end of the world.  Ah well, Team Bingham went out and cut a Christmas Tree and hung the decorations anyway.  Ah, the futility of it all ;).  It was nice to get out and about though.  This has been a brutal Fall with Daisey and Bear having Strep this past week.  Antibiotics were prescribed and everyone is on the mend now, but it was just another illness in a string of them this year.  Add to that the crazy crap of the day job and it has left me with no game time and quite truthfully, little motivation to work on gaming material.  But I did pull out the manuscript for Delve issue 2 this weekend and hack away at it a bit.  I had hoped to make better progress that what I've been able to muster.  Perhaps I should have done this up as a Kickstarter ;)?  Well, the only thing for it is just to do it.  Dustchapel Downs is the main city of my campaign world (when I'm running it anyway).  Well, her
2 comments
Read more
More posts