Showing posts from April, 2013
Show all

April 17, 2013
Heya Gang, I'm sure by now that most or all of you know that this is the Swords and Wizardry Appreciation Day.  While I'm not officially signed up to be a participating blog, I did want to chime in supporting Swords and Wizardry.  I'm a big supporter of all the verious "retroclone" systems out there (although I must admit to being more heavily in the OSRIC camp) and if you've played any of the older editions, it is a snap to convert between any of them.  In fact, I'm pretty confident that it is so easy, I'm going to give away five pdf copies of my zine Delve! at random to people that post comments in the comment section below.  So if only five folks post, then they all get copies.  At any rate, Swords and Wizardry is a great system.  Matt Finch, the mastermind behind it, was also the originating force behind OSRIC before turning it over to Stuart Marshall.  The main point of all of the clones, regardless of what you play, is getting out there and pla
13 comments
Read more 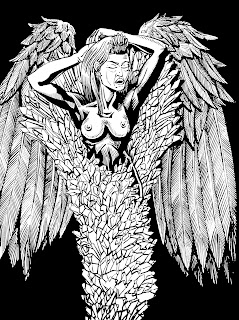 Ah yes, Petty Gods is a most fun project to work on.  I give you two of my latest pieces for the Petty Gods Project - The Lady of Lost Angels and Loe-Hann, the Goddess of Licentious Behavior.  Enjoy!
2 comments
Read more
More posts