Showing posts from October, 2010
Show all

October 24, 2010
So, as I've mentioned, I'm building momentum on my gaming projects. I think one of the hardest things for me is to scope out my projects effectively and then keep within that scope (Hrm, I'm wondering if I should take some project management courses). Anyway, I think I'm on to something that is pretty exciting for me at the moment. I'm going to modify the idea of the funerary island and create a self contained megadungeon adventure on the island. This will be part of my Shadows of the Umbra Palace adventure series and falls somewhere in the midlevel portion of the mega dungeon. I've finished mapping out the first level of a palace located on the island and two minor sublevels. I'll post those soon.
Post a Comment
Read more

October 21, 2010
I've been working on some dungeon maps for my project and I finally feel like I'm going somewhere with this. I'm not exactly sure as to the end result. So far, judging by the first almost complete dungeon level, it looks like it will be fairly sizable. And it will also have around three levels and some sublevels. So, what do you think? Would a weird fantasy dungeon be interesting?
Post a Comment
Read more

A Review of: People of Pembrooktonshire by James Edward Raggi IV

October 19, 2010
The Old School Renaissance (hereafter OSR) has spawned quite a bit of hobbyist gamers into becoming RPG designers, pundits, publishers, etc. This is nothing new. The hobby has pretty much had folks that have created their own additions, house rules, divergent systems, etc since the inception of the hobby. And even with the seemingly cyclical “sky is falling” doomspeakers that always seem to predict the end of the hobby, it is precisely because of the very inherent grass roots nature of the hobby that no one will ever to be able to effectively kill it. As the hobby has grown over the years, the flagship title or the game that stated it all created by Dave Arneson and Gary Gygax, has gone through several iterations; morphed beyond the original concept; become an industry success and a darling in the public eye as well as almost disappearing totally due to financial mismanagement and being reviled by many as a gateway to all kinds of alleged aberrant behavior. But quietly, the origin
Post a Comment
Read more

Here's another map I did several years ago ( I think it is from around 2005 or so). I'd been very inspired at the time by reading George RR Martin's A Song of Ice and Fire series and decided to try my hand at world building (You can tell that the map is somewhat vaguely similar to Westeros). I just felt like sharing as it is my first real attempt at some serious, full on world building. I think it gives a good basis to show where I started so that I can look back and see how things have progressed. Oh, and yeah, the world building idea is still kicking around in my head, but at the current point in time, it is outside the scope of my OSR projects.
Post a Comment
Read more 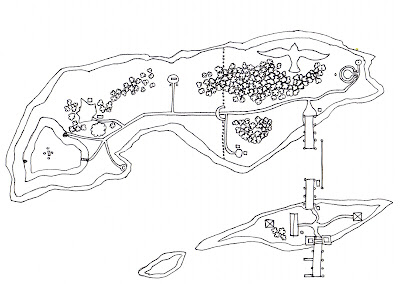 One of my biggest mental obstacles in regards to adventure design is undoubtedly map design. It is mostly because I gt so damn fiddly and wishy washy that they just seem to get out of hand and ultimately go nowhere. That said, I do like the idea of making maps. Here's one that I did about a year ago under the auspices of using it for my as of yet vaporware old school project. I've got a little bit of momentum built up and would like to ultimately tie together the random fits and starts of my adventure/project ideas. The idea behind this particular site is an abandoned island that as in the past used solely for ritualistic/funerary purposes. There is a funerary complex, a few scattered ritualistic sites to observe celestial/seasonal events, altar sites, a ritualistic cleansing site, and some other ideas. The smaller island is the gatehouse that has was the only part of the whole complex that had any semi permanent inhabitants in the form of priests/monks/nuns that we
Post a Comment
Read more

October 17, 2010
I'm realizing that a goodly portion of my gaming ADD stems from the fact that these days I'm more of a collector and afficianadothan a true gamer. You'd think that being on a military base (albeit a rather small one) would provide ripe grounds for gaming enthusiasts, but as of yet, anyone that I've been able to muster much enthusiasm in has been more interested in D&D 4e or other new shiny game rather than the older style of play I prefer. Plus, it goes beyond that since most of these prospective gamers are easily 15+ years younger and have a different view on what is fun and how to comport themselves in a social setting. Well, my son is almost to gaming age. As he learns to read, I'll encourage him into the gaming style that I am accustomed. Hopefully I have a prospective Old School Gamer on my hands. We shall see...
Post a Comment
Read more

October 16, 2010
Worked a bit on my next personal project. I'm trying to push myself into actually seeing through my OSRIC/OSR project that I had started way back in 2006! We'll see how it goes. Happily, I'm experiencing my Fall creative rush. However, I tend to have creative ADD so it is very hard for me to maintain focus and see things through unless I'm doing work for someone else. I tell you, having someone give you a deadline and a paycheck at the end of the deadline is a much better motivator. Perhaps I'll try and get my wife to be my taskmaster and try and keep my focus up.
Post a Comment
Read more

October 15, 2010
I just picked up my copy of Arc Dream Publishing's Delta Green supplement Targets of Opportunity. Again, nota lot of time to devote to it at the moment, but a cursory glance through leaves me with the feeling I'm really going to enjoy this one. But of course, I'm really itching to go through Lamentations of the Flame Princess. I hope to devote some time to that this weekend.
Post a Comment
Read more

October 14, 2010
What a lovely boxed game. I'll hand it to Mr. Raggi, this is one nice boxed set that is filled to the gills. I haven't had much time to do anything other than give a cursory look through of the contents. I will read through it and give my impressions here. I have to say that I really like many of his ideas so I'm really excited to dig into this one. My only realy dissappointment was that I didn't get to contribute any art to this set. Mr. Raggi did contact me about rates but I never heard back (heh, I even indicated I'd do it pro bono just because I liked his ideas). Ah well, that's OK too I suppose. I'll dig in and report back later with more.
3 comments
Read more

Forgotten but not Gone :) 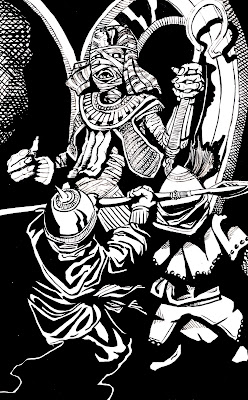 Been around but not posting mainly due to difficulties trying to upload pictures. The above image was one I did for Sorcery on the Sands by Expeditious Retreat Press. Apparently I can upload images but I have to do this on my laptop rather than my desktop which is a bit unconvienient. Hopefully though, that means I'll be back around more. I do have some more projects in the offing so we'll see how that goes. More details to follow when I complete the first leg of my latest project...
Post a Comment
Read more
More posts