Showing posts from December, 2011
Show all

December 24, 2011
So, we're making the final preparations for Santa's arrival. Daisey is reading the Night Before Christmas to the kids before sending them off to bed. Tomorrow, the kids will awaken to many presents and I'm sure much fun will be had by all. Santa is bringing Bear the collected Lego Heroica set. I'm not sure who will be more excited, Bear or myself. I'm looking to getting my game on Lego style tomorrow with the boy. Merry Christmas and Happy Holidays all!!
4 comments
Read more 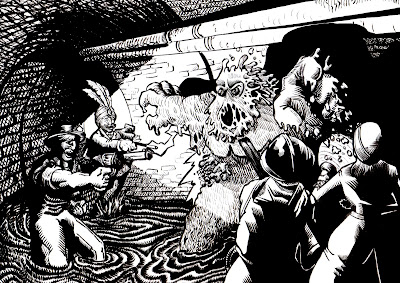 I'm pretty excited about Trey Causey's Weird Adventures. There is quite a bit of interest in weird fantasy these days. Much of that takes the form of the darker aspects of wied fantasy in a somewhat Lovecraftian vein. However, Mr. Causey has take a different path by revisiting the two fisted tales of the pulp magazines and adding in other strangeness. The pdf was just released yesterday ( see here ). There is a hardcover release that will follow up fairly soon. If you ever listened to the old radio shows such as the Shadow, read any of the old pulp stories such as Doc Savage, thrilled at the adventures of The Phantom, Mandrake the Magician, or even more modern fare such as Hellboy and the Goon, then you NEED to add this to your collection. It details The City, loosely based upon New York of the interwar (1920's-late 1930's) period. You can use it whole or take the pieces you like. At 165 pages, there is plenty here to inspire. I look forward to reading through
2 comments
Read more 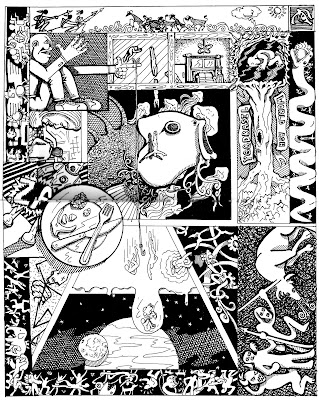 I like all kinds of comics. Superhero, fantasy, underground, experimental, comix, indie, etc. A couple of years back I got turned on to Abstract comics. What never ceases to amaze me is how versatile the form is. I don't do much in the way of sequential art because it is pretty demanding and time consuming. However, I toy with the idea of doing comics sometimes. Just a bit earlier, I was going through my large sketchbook getting ready to sketch out some ideas for some paintings that I wanted to do. I ran across this experimental comic that I did I guess about a year and a half ago. Not truly abstract but not exactly representational either. It was fun to do and is giving me some ideas.
6 comments
Read more

December 15, 2011
Lots of great gaming stuff coming out for us old schoolers and it looks like more goodness is on the horizon. I just purchased my copies of Lamentations of the Flame Princess Carcosa and Isle of the Unknown today ( see here for details ). I have been follow the progress of both and am excited to see the fully realized products. I have the original unexpurgated version of Carcosa and enjoyed it. Yes, there are some rather dark descriptions in there, but I felt that it really hit the nail on the head as far as trying to capture the horrific nature of sorcery as described by the likes of H.P Lovecraft, R.E. Howard, Clark Ashton Smith, and well, you know the stable. Sorcery in those worlds is ugly, evil, and highly ritualized - not the fire and forget spell slinging that seems to be the norm in modern fantasy. At any rate, I'm excited to see James Raggi really giving this a delux treatment. Another project that is along similar lines as far as dark/weird fantasy is the Astonish
2 comments
Read more

December 10, 2011
I don't have a real studio. Well, I guess more precise is that my real studio is the dining room table. I am OK with that as it is my only real option for the time being. However, I do like to see other artist's setups and work environments. Here's a pretty cool blog dedicated to creative spaces for cartoonists. You know, most artists like to work where they feel most inspired. I love to eat so perhaps the dining room table is a pretty good fit for me ;).
Post a Comment
Read more

A Shout out to a fellow artist

December 08, 2011
A little while back I completed my work for Autarch's Adventurer Conqueror King . I'm really excited about this project. Today, I just happened to stumble upon Ryan Browning's Etsy shop where he is selling his ACK art. Ryan's stuff rocks and I'm humbled to be able to have contributed a few pieces of art to this project. I highly encourage you all to go take a peek at his stuff, it is well worth it. As for me, I'm thinking about picking up a piece or two so you better go before I decide to spend some money ;). Having met Ryan and Tavis Allison in person at GEN CON this summer, I can tell you that they are great guys and it was fun to work with them. Do yourself another favor and go to the Autarch site and preorder a copy of ACK.
Post a Comment
Read more

No New Tales to Tell

December 08, 2011
Well not really from the Bingham camp. However, Trey Causey over at From the Sorcerer's Sroll is putting the finishing touches on Weird Adventures. Check out his latest peek here . It's shaping up to be a truly cool setting/supplement. I'm excited to have contributed some art, but more so because, well, Trey has some damn cool and fun ideas in there. It's an honor to be involved in the project, even just a tiny part. As to other projects, things continue apace. The Team Bingham has been beset by some nasty illnesses that have delayed things a bit, but it seems that things are finally getting back on track. I'm finally nearing a close for the Lands of Ara piece and hope to have the full B&W finished by this weekend. Daisey will provide the color work and at some point, you will get to see it. Also in the works is some B&W art for Small Niche Games. Pete Spahn has a cool supplement planned for his Chronicles of Amherth setting (which I did some wor
5 comments
Read more
More posts